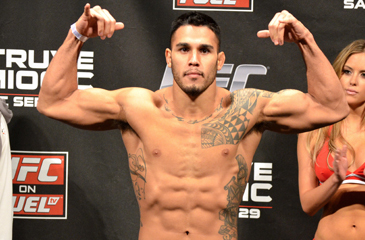 Here Hayabusa Europe would like to congratulate the Hayabusa UFC sponsored fighters who fought in the weekends UFC on Fuel TV 5 event held in Nottingham.

Hayabusa partnered up with Brad Tavares, fighting in his Red Hayabusa Chikara Fight Shorts, and saw him outwrestle British fighter; Tom Watson. The fight ending with a deserved split decision win for Tavares.

Both Jason “Shotgun” Young and Robbie “Problems” Peralta, were sponsored in part by Hayabusa on the night too, with Young fighting in the Red Hayabusa Haburi Compression Shorts and Peralta wearing the Blue Chikara Fight Shorts. It was Peralta who came away with the win in this clash, after landing big looping right hand that dropped Jason Young on his back. Peralta tried to follow up to pounce on Young to rain down further blows as the ref stopped him mid flow.

We wish the best of luck to Stipe Miocic for his future fights. Wearing the Hayabusa Croatian Compression Shorts for his fight against Stefan “The Skyscraper” Struve, he was on the receiving of one too many connecting blows from Struve as the fight was stopped by the ref in the second round, resulting in a TKO win for the giant from the Netherlands.

We offer similar sentiments to Yves ‘Tiger’ Jabouin, who fought in the Red Hayabusa Chikara Fight Shorts, who came away second best on the night to Brad “One Punch” Pickett. Jabouin, who fought impressively, was flawed by Pickett with an uppercut in the first round, Pickett followed with a few blows when Jabouin was down to seal the deal as the ref intervened to call a close to the fight.

For both winners and those who came out second best, we’d like to congratulate all the Hayabusa sponsored fighters on the night once again and wish them the best of luck for future fights.