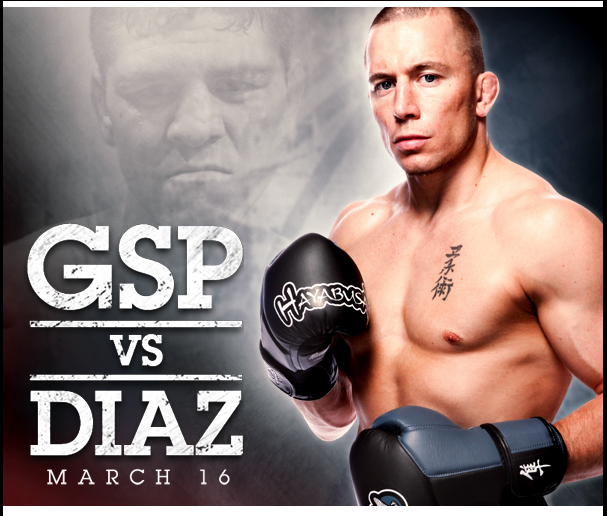 Georges ‘Rush’ St-Pierre is one of the most decorated mixed martial artists currently competing. ‘Rush” is also considered one of the best athletes on the planet. With over half a dozen title defences already, St-Pierre is set to take on his next challenge, Nick Diaz. Diaz, one of the more controversial fighters around, had a previous engagement with Georges, but this bout was scrapped and many fans were highly upset. Now with a new date set, these two warriors are ready to settle their differences.

Diaz will head into hostile territory and fight St-Pierre in his own backyard. Nick, a Cesar Gracie trained fighter, will present ‘Rush’ with the widest skill set he has yet to face. Diaz has some of the best offensive BJJ in the business, but it is his amazing boxing skills that will present the most difficulty. It is not uncommon for Nick to throw several hundred punches in one fight. Combine this with the athleticism of a top notch triathlete and you have a very dangerous fighter that can go full out for 5 rounds.

Georges may be the only welterweight that can compete with Diaz athletically. St-Pierre also has great BJJ, but it is his extremely diverse striking game that can change a fight. ‘Rush’ uses a vast array of kicks, knees, elbows and punches to keep opponents guessing. The biggest difference in the two skill sets is the devastating wrestling game that, to this date, no welterweight has been able to counter. St-Pierre flawlessly combines all his skills into a complete package that has allowed him to become the best 170 lb. fighter on the planet.

Georges ‘Rush’ St-Pierre has proven that training and hard work can take you to the top and the best athletes train with the best equipment; Hayabusa. Hayabusa is proud to partner with Georges St-Pierre and wishes him the best of luck as he looks to defend his title again.

Also on the card…

Patrick ‘The Predator’ Cote is making his welterweight debut and is doing so in his home province of Quebec. Cote first made a name for himself in the UFC by climbing up to 205 lbs. and going three full rounds with Tito Ortiz. Cote, who has fought most of his fights at 185 lbs., is dropping down in weight and looking to refresh his career. ‘The Predator’ has had a great run at middleweight and even challenged for the title. Patrick has devastating power and very technical boxing skills. Cote, with the drop to 170lbs., will be a fighter to watch. Patrick Cote and Hayabusa have a proud history together and we are excited to see what ‘The Predator’ can do at 170lbs.

Jordan ‘Young Gun’ Mein may be a new name for many mixed martial arts fans, but this fighter is one to watch. Mein has been involved in martial arts since the early age of 4 and turned professional at the tender age of 16. Mein, who is now 23, is about to have his 35th professional fight.

‘Young Gun’ is a skilled, patient striker with knockout power in his hands and feet. Mein will need all his skills as he is set to take on one of the most durable fighters in all of mixed martial arts, Dan Miller. Miller is as tough and rugged as they come and ‘Young Gun’ will need to bring his ‘A’ game to this fight. Jordan is ready to step into the spotlight on the big stage and let the rest of the world know what he can do. Hayabusa is excited to team up with Jordan ‘Young Gun’ Mein and expects this one to possibly be fight of the night.

Hayabusa would also like to wish John ‘The Bull’ Makdessi, Antonio ‘Pato’ Carvalho, Rick ‘The Horror’ Story, and Yves ‘Tiger’ Jabouin the best of luck in their upcoming bouts. These fine fighters all choose to train and compete in Hayabusa. Hayabusa expects a great night of fights and looks forward to an amazing, action packed card.

Cote will be wearing the Chikara™ Fight Shorts on fight night and Hayabusa is expecting fireworks. Take a look below.