Hayabusa has just released their brand new Marvel-inspired Boxing Gloves and it’s taken everyone by storm. Five of our most loved character now have a place in every gym in the universe. The gloves come with all of the features we know and love about Hayabusa products. The DUAL-X closure system, 4-way foam splint for extra wrist support and of course they are all handcrafted. Each glove is made by experienced professional artisans. So you can expect the same expert craftsmanship, high-end materials, techniques, and finishes as always. If you are new to Hayabusa click here to find out a little bit more about the gloves.

You can pick up five different Marvel characters, which include, The Punisher, Captain America, Black Panther, Iron Man and Captain Marvel. In either 12oz or 16oz. The gloves vary between being sublimated and stitched but the majority are the latter. Hayabusa has been working on these for quite some time but wanted to wait before releasing them to make sure every single aspect of the gloves were perfect first. And they are.

We will start with the best. Even though this is the only glove to be sublimated it is, in my opinion, the best in the range. Frank Castle has spent the past 40 years crushing skulls in and now you can as well. The design is split over the two gloves. So when you hold them up to your face, as you can see below, the logo is complete and you get something rather special.

Next up we have the Black Panther model. The intricate stitching on these gloves really live up to expectations and does the movie justice. These gloves will surely spin some heads.

GSP’s favourite, so do I really need to say anything else. I’m not American and I love these gloves so I can only imagine how you guys from the other side of the pond feel about them. There is just something special about walking into that boxing ring knowing you’ve got Cap’s shield with you. A masterpiece of a design and build the same way the Kanpeki gloves are that we all love so much.

A Marvel Range wouldn’t be complete without the movie that started it all. The Iron Man gloves may be a little bit more simplistic than some of the others released but that’s what makes them great. Not all of us can see ourselves wearing Punisher gloves. We just want something a little bit more down to earth, and that’s exactly what you get here. Just a shame they don’t come with a glowing blue light built into them but I hear Tony is working on it as we speak.

Last but not least, Captain Marvel, the latest hero to appear on our screens. We have has some gloves for the men so now it’s one for the ladies. Similar to the Captain America ones, these gloves have left no room for mistake. The big logo in the middle makes it pretty obvious who they belong to. Unfortunately, the special effects don’t actually come with the gloves yet but hopefully, it won’t be that way for too much longer.

What Do We Think Of The Marvel Gloves

These gloves come in as the most expensive from Hayabusa but they are still cheaper than Venum and Cleto Reyes top options. Ask yourselves is there really any price too high to become one of your favourites Superheros. I already know my answer, all I’m waiting for now is the European release and I can’t wait to be the first person in my gym to train in them.

Keep an eye on the Hayabusa website as the Marvel gloves are meant to arrive before Christmas but there will be a pre-order option available. And for those of you who think you’ll be fine to order last minute and get them no problems, these gloves completely sold out of stock within 3 days, when they went on sale in Australia. So don’t be one of those guys who sits at home depressed because you missed out. 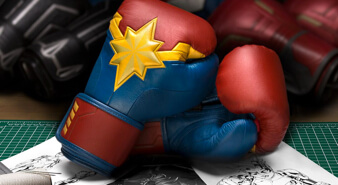