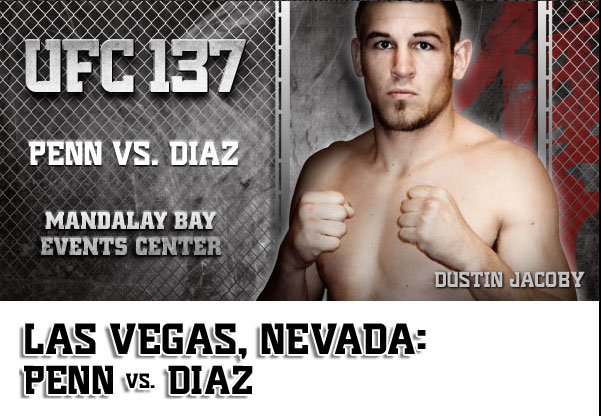 Accepting a fight on short notice can be a difficult task for a fighter. Preparation time, game planning, studying your opponent and weight cutting can make taking a fight on short notice hard. Having the opponent you were scheduled to fight on short notice change two weeks before the event is not easy either. Combine all this with making your UFC début and you have Dustin Jacoby. Jacoby is a product of Finney’s Hit Squad and has been training with some of the best fighters in the world. Dustin is an impressive 6’4” middleweight and boasts a perfect 6-0 record. These credentials make for a very talented prospect, but when you factor in that only one fighter has even made it to the second round with him and you have one of the hottest talents in the 185 lb division.

Jacoby is a finisher and is prepared for the “jitters” of fighting in the UFC for the first time. Dustin was a QB at the college level and feels his nerves will be on point for his début. Jacoby has finished five of his six opponents via (T)KO and the other by submission. His first scheduled opponent for UFC 137 was Brad Tavares, but Tavares ended up getting injured in training. Clifford Sparks has stepped up on short notice to take on Dustin. Jacoby is up to this ever changing challenge and Hayabusa is proud to partner with this rising star. Dustin will be wearing the latest offering from Hayabusa; The Chikara™ Performance Shorts.

Matt Mitrione is one of the most talked about fighters in the heavyweight division. Matt has some of the quickest hands in the heavyweight division and loves to throw them. Mitrione is as fast as a welterweight and has devastating power in both hands. When you combine the natural athletic talent of a former professional football player with a self-confessed “kinda crazy” mentality, you get a fighter that is very fun to watch.

Mitrione loves the fight game and is always excited to get into the octagon. It is not unusual to see him smiling at his opponent before the fight, but when the bell rings there is no doubt that Matt is ready to fight and his self-professed favourite striking technique is “The punch in the face”. Mitrione is 5-0 with all his professional fights taking place in the UFC. Matt’s only fight to go to decision was against Joey Beltran and Joey has only been finished once in over 20 fights. Matt loves to push the pace and will look to fully engage against his opponent Cheick Kongo. Kongo is riding the momentum of a great comeback KO of Pat Barry and has improved his ground game tremendously. Mitrione is ready for where ever this fight takes place and is not worried about the takedown. Though he would love to keep it on the feet, Matt knows that to be a complete MMA fighter he needs to be able to strike, wrestle and submit people. Mitrione has said that if he gets taken down he will just get back up and if he doesn’t get up he says “I promise, I’ll tap him or I’ll break something, but I’ll get something done.” Matt is incredibly confident and backs up his talk with a natural born talent and love of competition.

Hayabusa and Matt Mitrione are proud of our ongoing partnership and everyone expects great things from this fight. Matt is excited to be competing inThe Chikara™ Performance Shorts and Hayabusa wishes Matt Mitrione the best of luck in his battle against Cheick Kongo. As a special note Matt trains atIntegrated Fighting Academy. Located at 5301 Ste A Commerce Circle, Indianapolis, Indiana, the gym boasts a huge array of talented training partners for Matt. If you are in the area make sure to check out the academy and you might get to see such promising fighters as Matt Mitrione, Chris Lytle, Sean McCorkle, Johnny Rees and Jake O’Brien. Check out the Pro Shop for all your Hayabusa needs.

Hayabusa is proud to announce the launch of our newest shorts;

Hayabusa leads the industry in cutting edge technical apparel and The  Chikara™ Performance Shorts are the pinnacle in multi-discipline shorts. These shorts are perfect for everyone from professional MMA fighters, to no-gi grapplers, right down to the once-a-week fitness kick boxer.

Hayabusa has incorporated all the latest technological advances in The  Chikara™ Performance Shorts; the Exclusive Pro Mechanical™ Stretch Fabric, theInnovative Tie System and Indestructible Webbing, Hayabusa’s Exclusive Guardlock™ Inner Grip Waistband, Permanent Fiber Fused Designs, High Tensile Strength Stretch Panel and Split Side Seams, Reinforced T3 stitching and much more. Now there is a pair of shorts that will go from bag work, to sparring, to the treadmill and beyond. Soar above the competition in Hayabusa’s  Chikara™ Performance Shorts.

As you may know from our recent Blogs, Newsletters and Facebook posts, we’re expecting to have the new Chikara Performance Shorts (currently only available in the U.S. and Canada) by December, so stay tuned for further updates