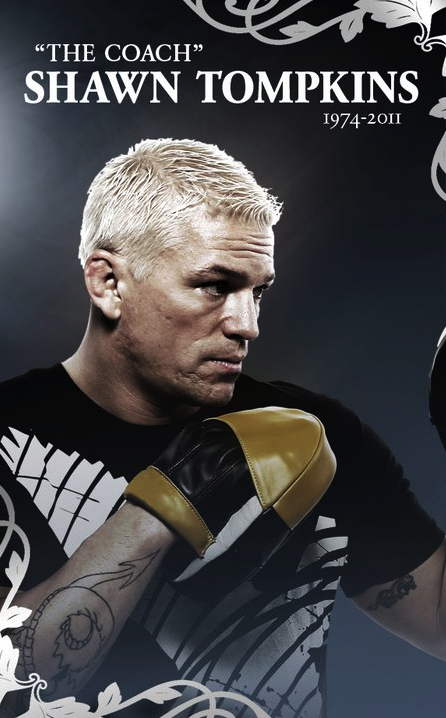 It is with a heavy heart that we, at Hayabusa, say goodbye to Shawn Tompkins. We feel blessed to have worked with him as one of the preeminent striking coaches in the sport of mixed martial arts, but as a man he was much more; mentor, husband and father (to all the athletes he trained). We were proud to have had the chance to work with Shawn, but more importantly, to have been able to call him our friend.

Everyone at Hayabusa will cherish their memories of Shawn. Our thoughts are with his family and friends in this time of sorrow. Though he is gone, he lives on in the hearts and souls of those who knew and loved him.

Shawn, you will always be part of Team Hayabusa.

The Shawn Tompkins Memorial Fund has been established and those wishing to contribute may contact [email protected] A memorial service will be held in Las Vegas in the coming weeks; details will be announced at www.amrgroup.tv

Shawn Tompkins was born and raised in Tilsonburg, Ontario, Canada. At age six, he began studying Shotokan Karate and a decade later, he was a two-time Canadian National Karate Champion. He went on to become a third-degree black belt and had the rare honor of having his black belt certificate signed by the Prince of Japan.

Fascinated by the art of business, Mr. Tompkins opened his first training facility in Ontario, Canada, when he was only 18 years old. He went on to become the assistant coach to his trainer and mentor Bas Rutten for the International Fight League’s Los Angeles Anacondas. He later replaced Rutten as head coach and led the team to an undefeated season in 2007.

Mr. Tompkins was considered by many as one of the top MMA trainers available and is known in MMA circles as the architect of the first MMA Specific Striking Program. His countless accomplishments made him one of the most sought-after MMA striking coaches in the world.

He was inducted into the 2009 Masters Hall of Fame with the Pioneer Award, the same year he was selected as one of Las Vegas` Most Successful Men by Esquire Magazine.